How a Man Named Chesley Can Help Your Child Manage Anxiety

One of the most powerful techniques to manage child anxiety is something I learned from a man named Chesley.

Chesley loved planes. The first time he ever saw a plane speeding down the runway and rising off the ground, he was awestruck. Chelsey was five years old and he knew right then and there he had to have a life in the air.

Chelsey took his first flying lesson when he was sixteen. A few years later, he joined the U.S. Air Force and went on to become a fighter pilot. Thereafter, he continued to follow his passion into a career as a commercial airline pilot.

By this time, no one ever referred to him by his full name, Chesley Sullenberger; he was simply Captain Sully. That name might ring a bell with you because a few years ago, Captain Sully made international headlines.

You may recall that one day in January 2009, when Captain Sully was making a routine trip from New York City to Charlotte, North Carolina, on US Airways Flight 1549, something terrible happened: the plane collided with a flock of Canadian geese, damaging and shutting down both engines. 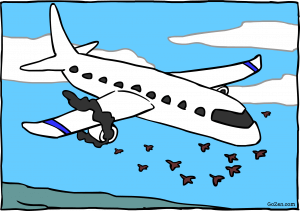 Captain Sully knew he had no alternative but to land the plane—on the Hudson River! Over the intercom, he uttered words he never thought he would say on a flight: “Please brace for impact.” Then Captain Sully expertly glided the plane onto the water’s surface and saved all 155 passengers. 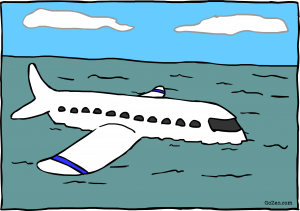 When Captain Sully was asked in an interview what he did as soon as he felt the impact with the geese, he said he looked over at his first officer, Jeff Skiles, and asked him to find the emergency checklist.

Hearing this story for the first time gave me pause. Wait. Captain Sully had forty thousand hours of flying time and twenty-nine years of experience, including seven years of flying Vietnam-era F-4 Phantom II jets for the air force, and he needed what? A checklist?! Clearly, Captain Sully was an expert, so why did he need a checklist?

Captain Sully needed a checklist for the very reason we all do when we’re in an emergency situation: Survival instincts kick in. Specifically, our body activates the stress response and the logical part of the brain is put on hold, while the faster, more automated emotional brain is put in charge. This makes it hard to think clearly. In a calm situation, perhaps Captain Sully would remember all the steps to take for an emergency landing of this sort. But this situation was far from calm.

So you’re thinking, nice story. But how does knowing this help a child experiencing anxiety?

Anxiety mimics the stress response. When children are in the throes of anxiety, even if they’ve acquired tools to manage their worry, sometimes it’s hard to remember the steps to take to feel better.

One of the simplest, most powerful things your child can do when he or she is anxious is to use a checklist, or what I like to call a “Chill List.” Every child’s Chill List might be different, based on the techniques that work for him or her. Check out a sample below.

After using a Chill List for a while, your child might have the same reaction Captain Sully had after his emergency landing: “First Officer Jeff Skiles and I turned to each other and, almost in unison, at the same time, with the same words, said to each other, ‘Well, that wasn’t as bad as I thought.’”

Get more great tips and animated tools with our program for parents or practitioners.

A Mindful Minute: A Funny-Looking, But Powerful, Breathing Exercise for Kids