Separation Anxiety, Over and Out

From a caring community member.

When my daughter Katrina was 8 years old, she seemed to be having a good year in school. I had divorced Katrina’s father three years earlier, and although he had moved out of state, he visited her several times a year while traveling for work. Katrina was an only child, and she and I had settled into a routine together. After some initial separation anxiety during the first few weeks of kindergarten, Katrina grew to enjoy school and was well-liked by her classmates.

In November of Katrina’s second-grade year, a few days before Thanksgiving, someone broke into our neighbor’s house. No one was hurt, but Katrina seemed spooked by the incident. She asked numerous questions about what had happened, as if she were constantly thinking about it. She began having nightmares in which, she told me, “You float away, Mommy, and I can’t find you anymore.” Katrina began sleeping in my bed at night and refused to sleep in her own room. 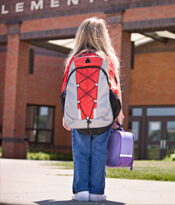 After Thanksgiving break, Katrina began to cry in the morning when I dropped her off at school. Her teacher called me to say that Katrina seemed distracted and was sitting alone at recess. At that point, I decided to take Katrina to a counselor. A friend referred me to Sally R., a local counselor who specialized in play therapy.

I did a phone consultation with Sally, describing Katrina’s circumstances and learning about Sally’s methods for treating child anxiety. She explained that play therapy is not a direct cure for a psychological issue, the way that antibiotics cure an infection. Instead, the play therapist uses the metaphorical language of play to help guide the child into processing and resolving the situation organically. (In some situations, if needed, the counselor could also refer the family to another professional who could provide anti-anxiety medication or other forms of support.) Sally said that her methods were child-centered, meaning that she would follow Katrina’s lead in the sessions, with an emphasis on routine and consistency.

When I explained to Katrina why we would be visiting Sally’s office, she was apprehensive about meeting Sally but seemed intrigued by getting to play with all those new toys. She was quiet on the ride there and appeared nervous in the waiting room. But when Sally came out to introduce herself and shake Katrina’s hand, it was clear that Katrina liked her right away. She barely even looked back as I told her that I’d be right there in the waiting room during the session. When she came bounding back 45 minutes later, she was beaming. “Mommy,” she said excitedly, “Sally has a whole drawer of stickers and I get to choose a sticker every single time I see her! And she has lots of stuffed animals and puppets and dolls and glitter glue.”

For the next six weeks, I took Katrina to see Sally each Tuesday and then talked to Sally privately on the phone the following day. Sally had explained that Katrina had a right to confidentiality (although Sally was obliged to share any serious or harmful information that Katrina might disclose), and that instead of reporting exactly what Katrina said or did during sessions, she would simply be giving me a summary of what she was seeing. One of Katrina’s favorite games in play therapy was using a pair of walkie-talkies. Sally explained that walkie-talkies or a pair of toy telephones provides a safe way for kids to talk about how they’re feeling, because it gives them a feeling of connectedness while also not forcing a face-to-face conversation. Sally said that they were also working on identifying feelings and would be making a feelings journal for Katrina to write, draw, or paste pictures in.

Following Sally’s suggestion, I began encouraging Katrina to go to bed in her own room, although she was still allowed to come to me at night if she felt scared. We started a bedtime routine in which we did everything in the same order, just as we had when she was in preschool. At Katrina’s request, I read “Goodnight Moon” to her each night and then put on CD of lullabies that she had enjoyed when she was younger. Katrina seemed to enjoy having a bedtime routine that she could count on, and as the days passed, she came to my bed less often at night. When I spoke with Katrina’s teacher, she said that Katrina seemed to be returning to her normal outgoing self.

One night, just before I turned on her lullabies CD, Katrina put her fist to her mouth and said, “I have a question. Over.” I quickly 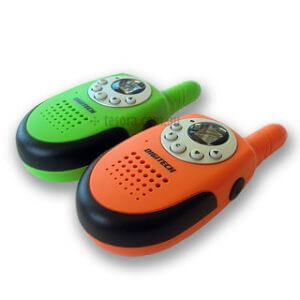 realized that she was mimicking the use of a walkie-talkie, so I also put my fist to my mouth and replied, “I’m listening. Over.” Katrina said, “I was wondering how come Daddy doesn’t call me a lot. Over.” In the new few minutes, we had a good talk about Katrina feeling disconnected from her dad and worrying about his safety. She revealed that she would like to have her dad call her at the same time every week, and we made a plan to talk to him together about it. I was impressed that the walkie-talkie game allowed Katrina to feel brave enough to ask me a difficult question.

Soon, the time came when both Sally and I felt that it was time to end her counseling. Sally explained that she and Katrina would have a special session to celebrate her “graduation” from counseling and say goodbye to each other. When Katrina came into the waiting room after the last session, she was beaming. Sally shook my hand, and Katrina gave Sally a hug, saying, “I really liked counseling!”

On the way home, Katrina told me, “Sally said that we can always be heart friends, even if we don’t see each other. And if I ever need a counselor again, you can call her and she can help me.” That night, Katrina said she had something to show me. She pulled out the feelings journal that she and Sally had created together. “Sally said that my feelings journal is very special and private, and I should only show it to someone who is a very good listener,” Katrina said. “You’re a good listener, Mommy.”

Hello, humanoid! As you may know, the community blog contains true stories contributed to the GoZen! site. The Earthly people of law have asked me to remind you these stories are not to be construed as medical advice. Instead, we hope you are inspired and empowered by the journey and healing of others. If you would like to contribute a story to inspire others, please send it in here!

1 thought on “Separation Anxiety, Over and Out”