Sixth grade history was a tough subject for me. Anytime Mr. Brown asked a question, I desperately averted my eyes or doodled in my notebook to look busy. Once in a while he called on me anyway. That triggered my anxiety: “What if I get the answer wrong?” “What if everyone laughs at me?” “What if… ?”

I usually hemmed and hawed because even if I did know the answer, I preferred to double-check my response mentally before speaking. Mr. Brown always waited patiently, but there was a boy who sat next to me—let’s call him Lou—who kept his arm raised the entire time I was thinking.

In fact, every time Mr. Brown asked the class anything, Lou flung his arm into the air, leaned over his desk, and hooted like an injured owl until he was called on. Mr. Brown seemed irritated at times, but that never stopped Lou. I often wondered, “How does Lou always get it right?”

It took me a long time to realize that Lou wasn’t actually getting it right. In fact, most of the time, Lou got it wrong because he was simply blurting out the first thing that popped into his head.

One day after class I overheard Mr. Brown speaking to Lou about his behavior: “Lou, I know you’re eager to participate in class, and that’s a good thing. But I want you to try something for me. Think about what you’re going to say for at least five seconds before raising your hand. Before you raise your hand, ask yourself: Is this really true?”

That day Mr. Brown inadvertently provided me an incredible tool. His advice helped me begin a process of questioning my own thoughts. I now offer his advice to other children experiencing anxiety: Every single time you have an anxious thought, ask yourself: “Is this really true?” 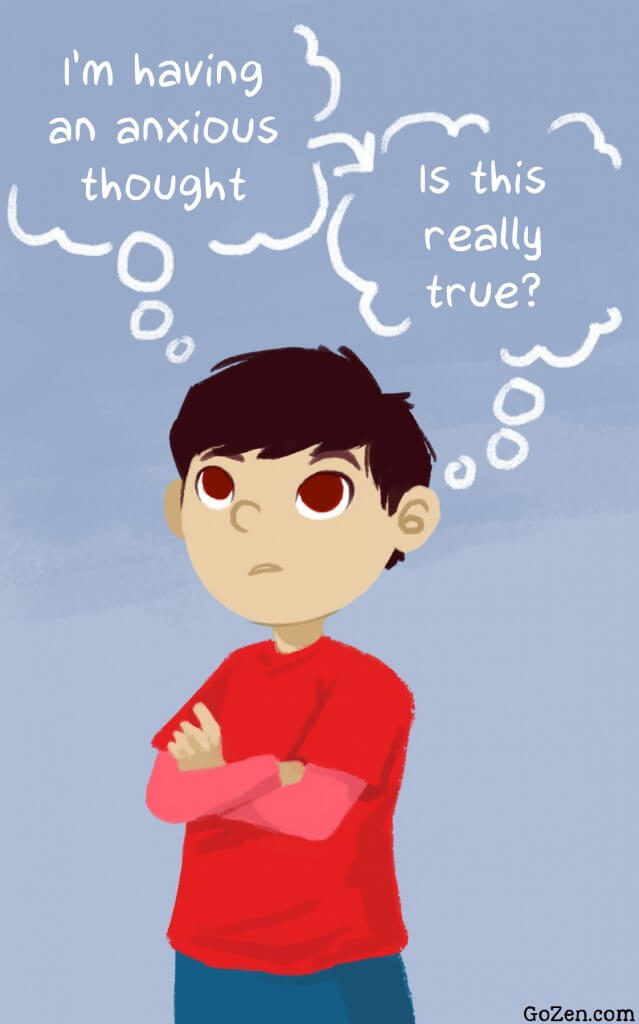 Why Is This Question an Effective Anxiety Management Tool?

Thoughts pop into our heads all the time. What we know from research is that many of our thoughts are notoriously inaccurate—especially anxious thoughts. Yup, anxious thoughts stink at being right. But why?

From an evolutionary perspective, being a little worried helped us survive. The worried caveman may have been more attuned to the cat lurking in the bush. To make sure the caveman was paying attention, the mind often exaggerated the object of the worry (e.g., mistaking a stick for a snake). This tendency has left an imprint on modern man to magnify what might go wrong.

For example, I often had the thought, “Everyone in class is going to laugh at me if I get the answer wrong.” That anxious thought made me feel too nervous to speak my mind. And one anxious thought often cascaded into several others that culminated in behaviors such as sulking, withdrawing, or acting out.

Because thoughts have the power to influence our feelings and behaviors, it’s important that we think more in line with reality. So, when your child has an anxious thought, teach them to pause and ask themselves, “Is this really true?”

Get more great tips and animated tools with our program for parents or practitioners.

5 Phrases to Avoid Saying to an Anxious Child (Infographic)