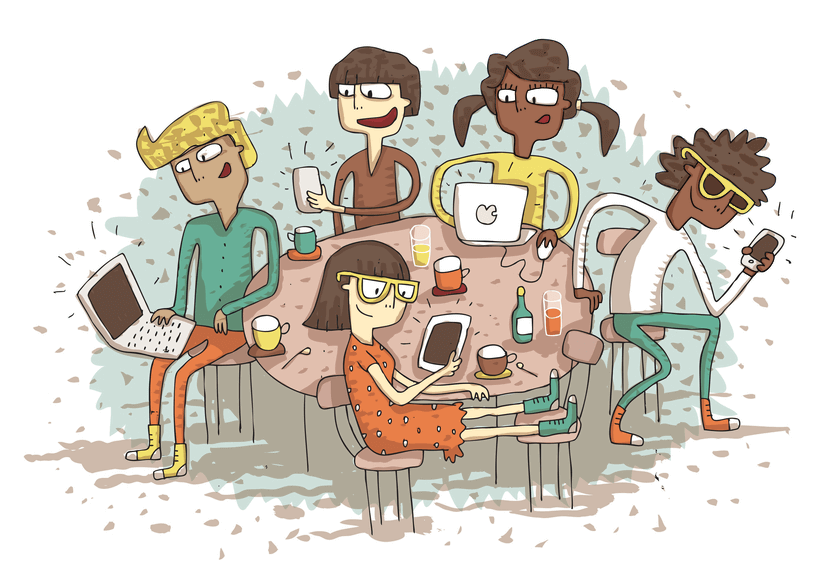 Parents, in increasing numbers, are concerned about their teens’ use of social media. With countless news stories, books, and articles detailing its hazards, noise on the topic can make it hard for anyone to understand what’s true and what’s not. Parents trying to understand the digital generation have their work cut out for them.

At the same time, teens by the millions have fully immersed themselves in the digital world. They have their own views on what’s happening, but they’ve never known life without social media, which makes it difficult for them to have perspective on the legitimate, research-backed concerns about its effects. Teens, like their parents, may have work to do.

Social media is here and isn’t leaving. It’s a part of our lives and the lives of our kids. 92% of teens go online daily. Of those, 52% are online several times per day, and 26% are online almost constantly. So why fight it? Is there cause for concern? Is it all alarmist hype? There are no immediate or easy answers. Every family will need to decide on their own unique approach.

However, there are so many layers to the issue, it’s hard to know where to start thinking critically about our habits and the habits of our children. As a start, here are 10 concerns about kids on social media, along with some reasons not to be worried.

Research suggests that kids are drawn to social media environments because it’s where their friends are. When talking to teens, interviewers hear that most kids would rather be hanging out face to face, but that’s not always possible: often there is no transportation; some malls enforce restrictions on groups of teens; they’re not allowed to go out on school nights. Kids’ solution is to find friends online. It’s their place to hang out. It’s a valid tool to promote social interaction. It’s their mall. But, it’s also their house party, and for many, the parents are out of town 24/7. 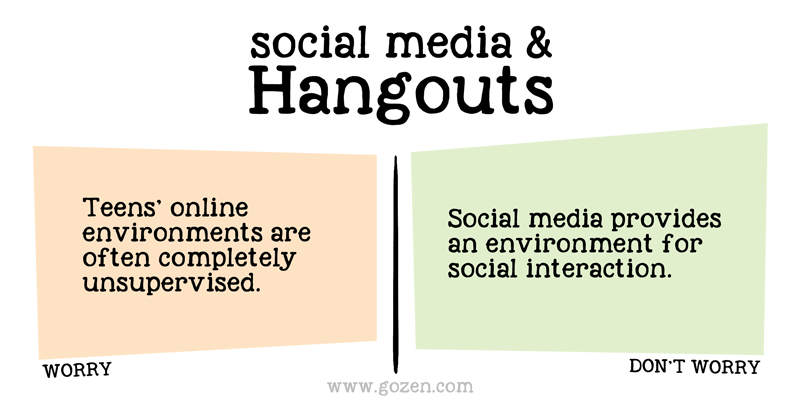 Yes, it’s addicting. However, there’s debate about the reasons. There is general agreement that the rewards of social media (likes, shares, comments, messages) trigger a release of dopamine, the same pleasure-controlling chemical that is released in the body when addicted gamblers or substance abuse addicts get their fix. Being liked is addicting.

However, Danah Boyd suggests in her book “It’s Complicated” that, well, it’s complicated. She found that kids are really addicted to their friends, and that it’s more about social participation. Teens want to go where their friends are, and this is nothing new. Other researchers have documented a real fear among teens that if they don’t make social media a constant part of their social lives, they would have no social lives. 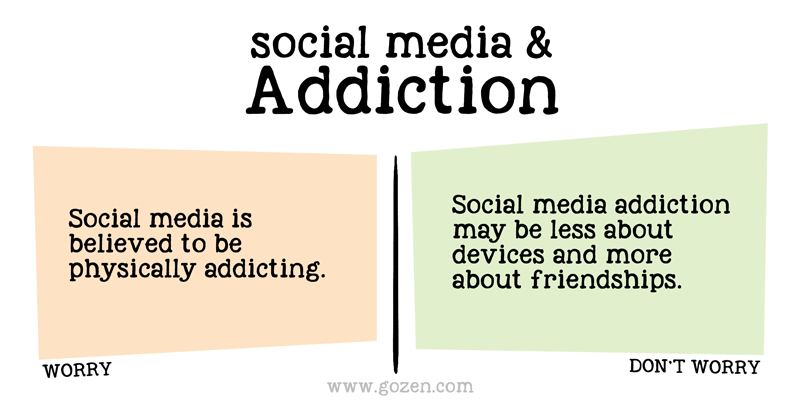 For some, Social Media is a path to celebrity. Youtube, Instagram, and Snapchat have made millions of dollars for people whose talent is collecting likes and followers. These digital celebrities earn endorsement deals, sponsorships, and jobs in television, film and radio.

Obviously, this potential for fame is attractive for teens. But for those who wish to achieve that brand of notoriety, the cost might be high. In an increasingly crowded environment, those who wish to stand out may need to push the boundaries of what they might otherwise deem morally acceptable behavior. Too often, they’re willing to do that. 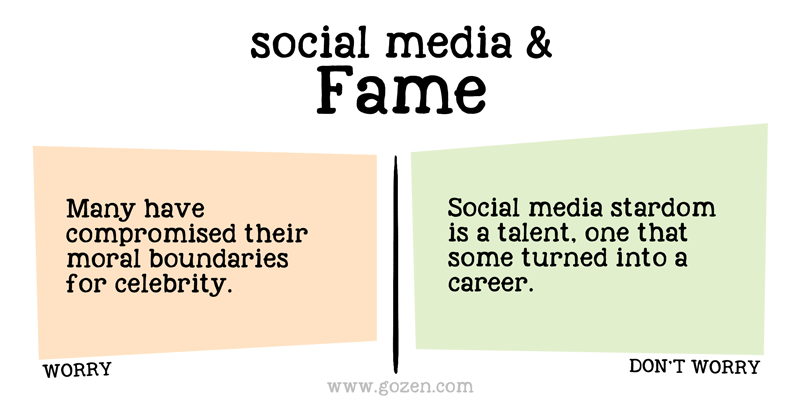 Growing up, my generation’s version of an online profile was a logo on a t-shirt, or the pictures hanging in our lockers at school. Now kids make statements about who they are online: their profile picture; the product brands and videos they like; the content of their posts. They, like every teenager before them, are working to forge an identity, and social media gives them highly accessible, flexible tools to do so.

But it’s also easy to get wrapped up in an online identity. What if nobody clicks like on your new profile pic? Does that mean they don’t like you? It’s often difficult to separate reality from the world of 1’s and 0’s. We are NOT our profiles. 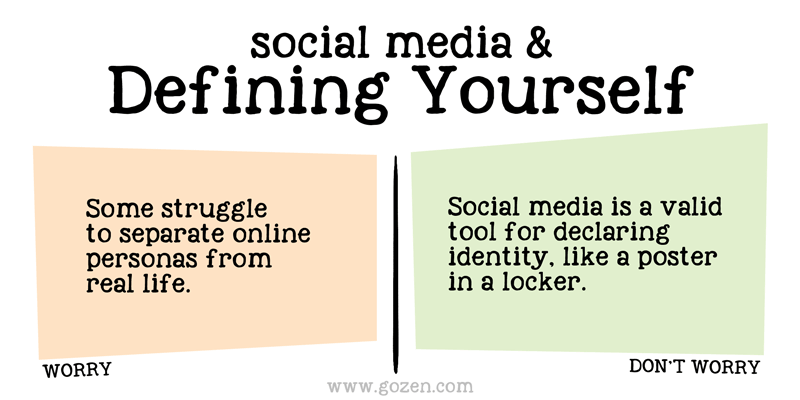 A recent study found that regularly snapping and posting selfies may lead to increased happiness. But digging deeper into the behavior unearths problems. In her book “American Girls,” Nancy Jo Sales illustrates how typical responses to selfies that girls post are words like “gorgeous,” “sexy,” or “hot.” And many girls place terrific stock in those assessments, to the degree that they quantify their own beauty based on the number of likes they earn. Their self worth becomes measureable. If one pic doesn’t gain them the response they want, they work harder at the next, sometimes spending hours each day preparing themselves for, and snapping, the perfect pic.

Furthermore, young boys, both emboldened and desensitized by social media, have increasingly fewer reservations about pressing girls to send them more sexually explicit photographs. And girls feel social pressure to comply with those requests. Such lewd behavior on the part of young males is also thought to be about self worth. Social media gives boys a path to achieving a type of alpha-male status that wasn’t previously available to them. The quest to seem powerful and dominating is as much about social pressure as being beautiful or desirable is for girls. 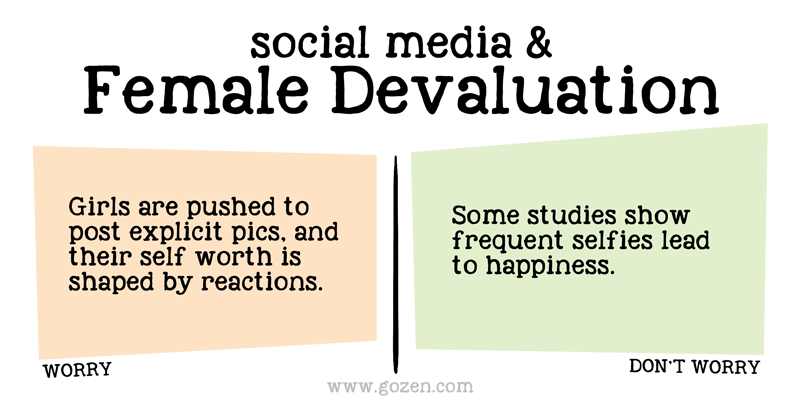 Repetitive, sensory activities change the way our brains process information. Such concerns were voiced decades ago when kids began watching television in their homes, when video game systems entered the living room, and when personal walkmans were introduced. Some researchers argue that concerns over the developmental impacts of social media are nothing new—a typical, alarmist approach to technology adults don’t understand.

Others argue that screen time is at an all-time high, and it certainly forges new connections in the brain, strengthening certain pathways and severely weakening others. Dr. Frances E. Jensen in her book “The Teenage Brain” describes how teenagers’ still-developing minds are more susceptible to permanent, lasting changes. 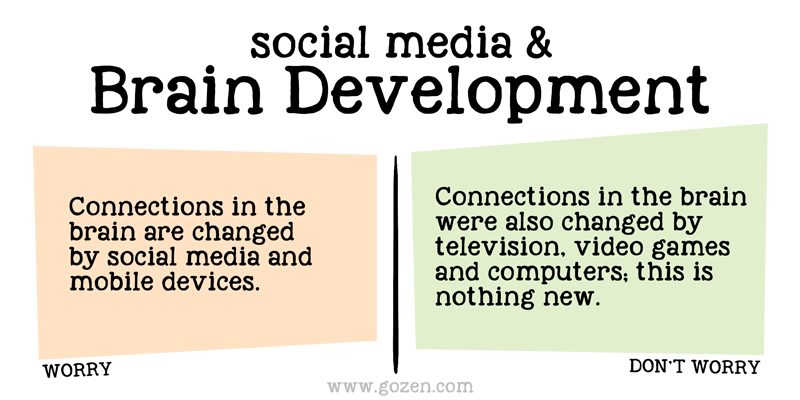 Teens, and adults, love to “tune out” and relax by scrolling social media. Many find it a relaxing escape. A way to refresh. Some might call it a happy place. In small doses it can be just that.

However, research shows a connection between time spent online and lower rates of happiness. In experiments, kids asked to spend a week away from social media had vastly greater levels of wellness and satisfaction. Furthermore, rates of depression over the last six years are up more than 50% in teens, and suicide rates among young teenage girls are up 300% in the same period of time. She argues strongly in her book that there is a connection there, as well. 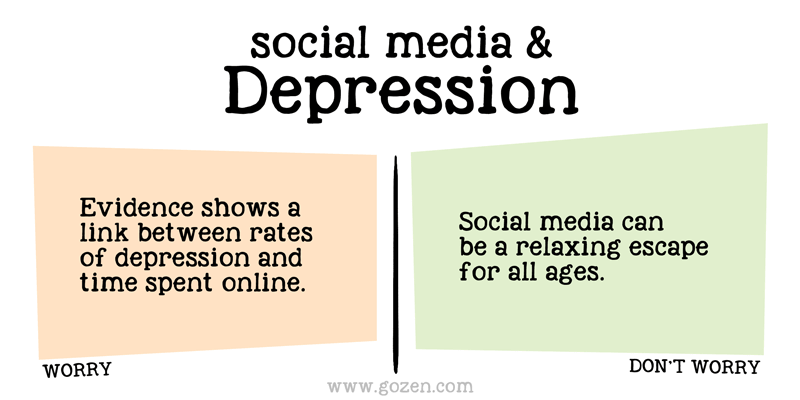 Like so many of these issues, social media did not lead to the invention of bullying. However, it does give cruelty, in all its forms, a larger, more easily accessible audience. It accelerates the spread of gossip and makes insults more permanent and visible. Focusing on news reports, one gets the impression that cyberspace is a den of aggression and insults.

Cyberbullying is an issue, but teenagers see it differently. According to Boyd, most of the teens she interviewed saw bullying as an adolescent act, something outgrown after middle school. They were more likely to label negative exchanges on social media using words like “drama,” “punking,” or “pranking,” terms that suggest more balanced fights, two-way aggressions, or even playful exchanges, rather than the one-sided, abusive, repetitive imbalance of power that defines bullying. Make no mistake, cruelty is cruelty, regardless of semantics, but don’t be surprised if teens fail to recognize a bullying epidemic in the same terms adults do. 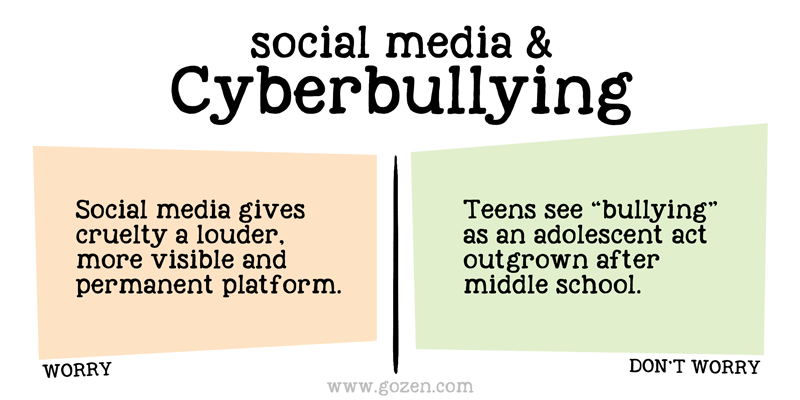 Each social media platform is a business, and every click, share, like and post means real money to somebody. The more regularly people engage a medium, the higher that company’s value rises. Constant engagement means they can charge other businesses more for advertising. And those advertisers are eager to pay, because social media means they can market more directly (remember all those likes that define us?), and monitor reactions to their campaigns in real time. That’s great news for business owners leveraging social media to drive sales and drive our economy.

Now, consider for a moment the tech industry’s interest in keeping people, including kids, glued to their devices. They have a huge financial interest in a world getting unhealthy doses of screentime. 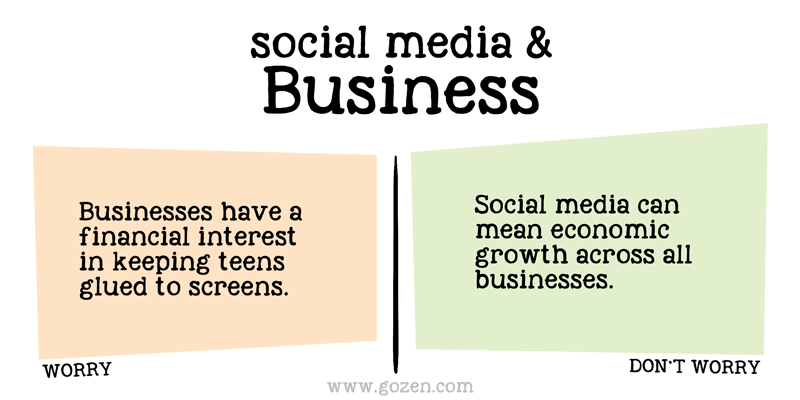 David Crystal, in his book “txting: the gr8 db8,” explores the complexities of the short-hand language of texting and instant messaging, and while acknowledging the lasting, long term impacts of its use, cites evidence that it helps rather than hurts literacy. 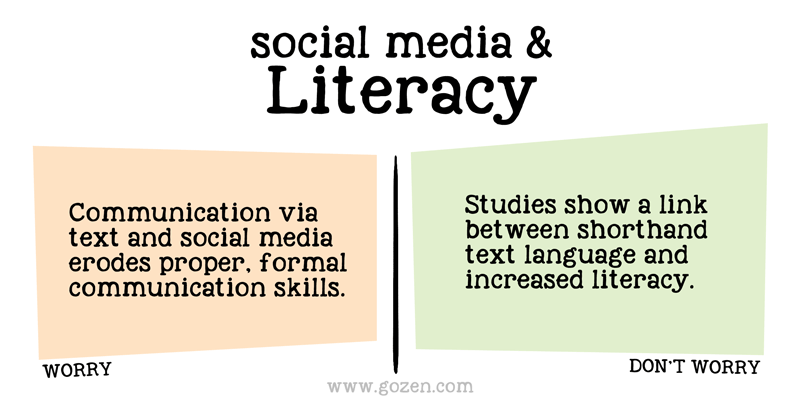 Do you have concerns about issues not on our list? Please leave a comment and let us know. We’d love your feedback as GoZen! prepares to deliver creative content on the topic of social media.

Twenge, J. M. (2017). IGEN: why today’s super-connected kids are growing up less rebellious, more tolerant, less happy— and completely unprepared for adulthood (and what this means for the rest of us). New York City: Atria Books.

13 Reasons Why Not (Original Song)